As most of you know it was my birthday on Friday and I had decided to surprise Shawn with a weekend trip to Rome, Italy. I lived in Rome for 8 months 13 years ago, so I have already walked most of the main streets many times, but no matter how much you go you never get tired of this place. Every time you round a corner, there is a new piece of history to be told. I snapped a few pictures of some of the main sights (Anne Mette you would not be proud of me), which I will post soon. Thank you once again for all the nice birthday greetings from everyone and particularly thank you to my mom who made the trip possible by taking good care of Sienna and Elliot back in Copenhagen. 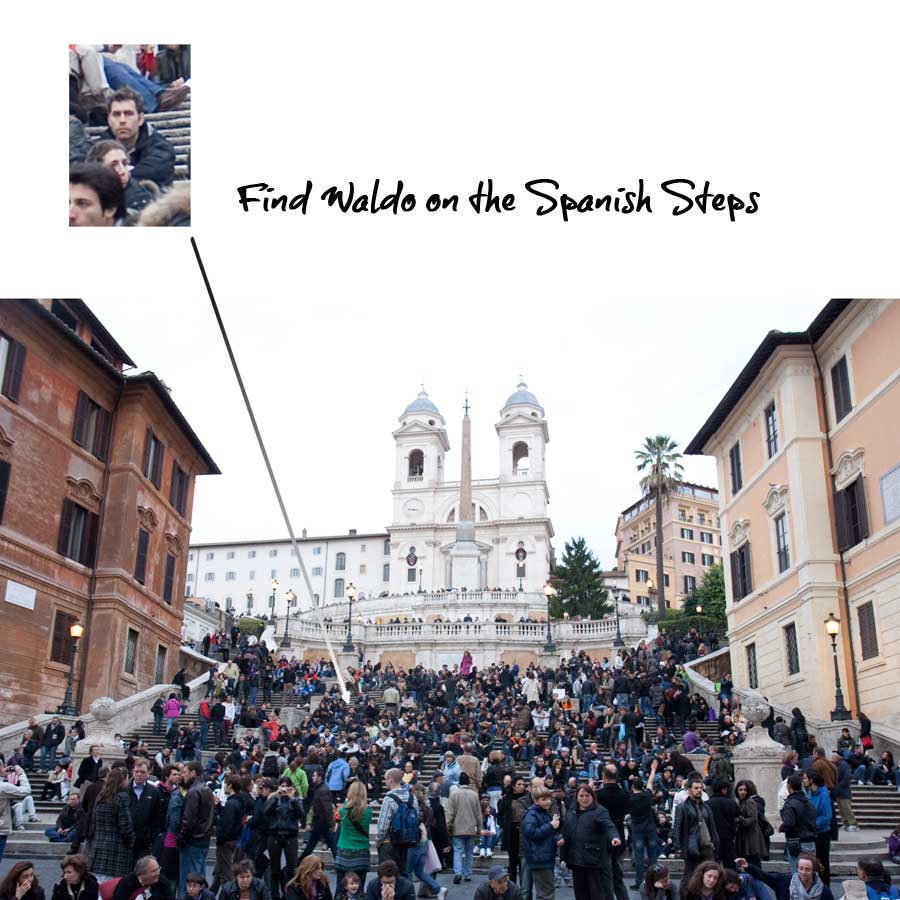 In my book airlines generally have a pretty bad track record. It is extremely rare that thinks run smoothly and when we weren’t able to check in for our return flight on Wednesday I already started having bad feelings. Shawn called KLM and they did confirm that we were checked-in on 4 seats together, but when we arrived at the airport in due time, those seats had been given away to someone else. Everything was somewhat chaotic because they had canceled the previous flight and now they were stuck with 400 passengers too many. They managed to get us on a flight with Air Canada via London, but we had to run from terminal 3 to terminal 1 with two tired kids and well over 200 kilos/450 pounds of luggage.We could never had made it if it weren’t for Shawn’s good friend Oliver, so once again a BIG THANKS to him (he also always meets and greets us at the airport when we fly in).

At terminal 1 the Air Canada representatives didn’t think it was a problem that they could only seat us one by one (we had a seat in the middle row on 4 different rows). They thought that we should just be grateful they came to our rescue and found seats on a sold-out flight. Fortunately the air hostess was very friendly, and she managed to get us somewhat together so Elliot and Sienna didn’t have to handle the 7-hour flight commute to Europe on their own. The airplane was much smaller than KLM’s, but much never and nicer, and the kids slept reasonably well so other than the initial stress it actually ended up being a quite tolerable journey for once.

Sienna has already mentioned many times that she misses Canada and the family and friends there, but both the kids were still very happy to be home and were jumping around once reunited with all of their toys and their rugbrød (i.e rye bread which is only made properly in Denmark). Our 8 suitcases and 5 carry-on bags were cleared out an put away in record time (less than an hour) and now everybody is working on overcoming the jet lag while the washing machine is working on the first of approximately 20 loads of laundry it has coming.

After the cruise we had a few hours to kill before we headed back to Canada, so we decided to check out the Florida Aquarium, which is right outside the port. I went inside with the kids while Shawn stayed with all of the luggage. It was difficult taking pictures when I had to attend to Elliot and Sienna at the same time, but it is a pretty nice and big aquarium.They had some huge stingrays and a very big and very ugly fish(bigger and longer than Sienna). They also had alligators, starfish that you could touch, parading penguins, and lots of colorful fish and jelly fish. 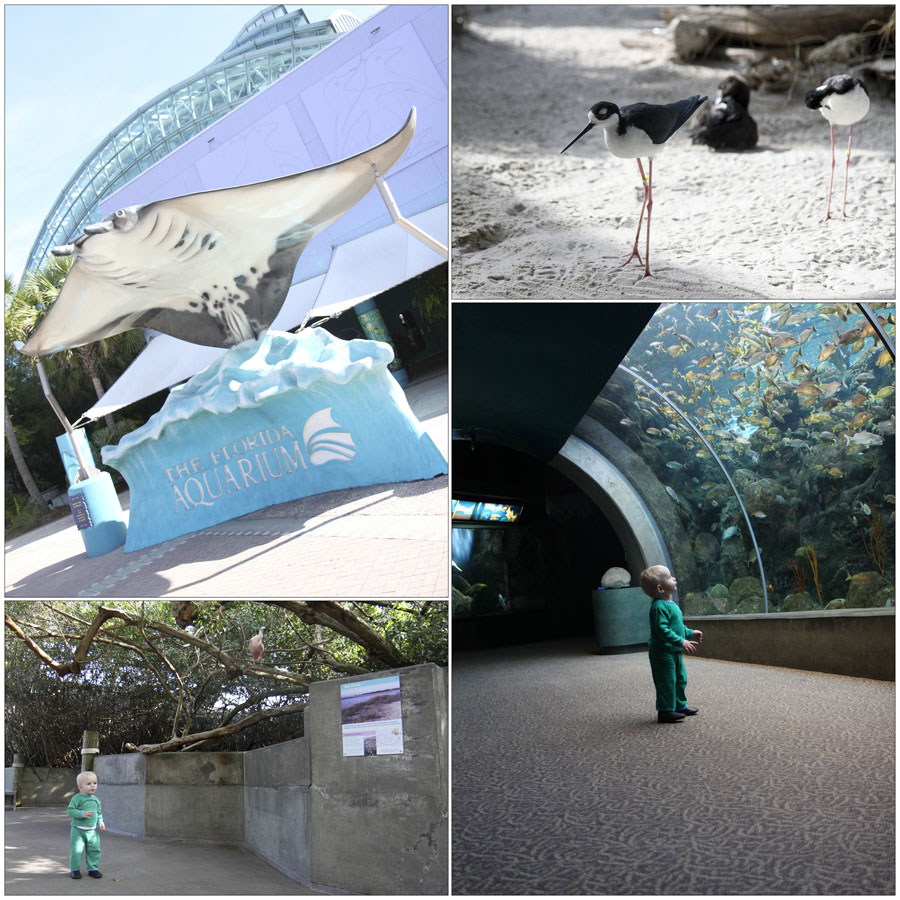 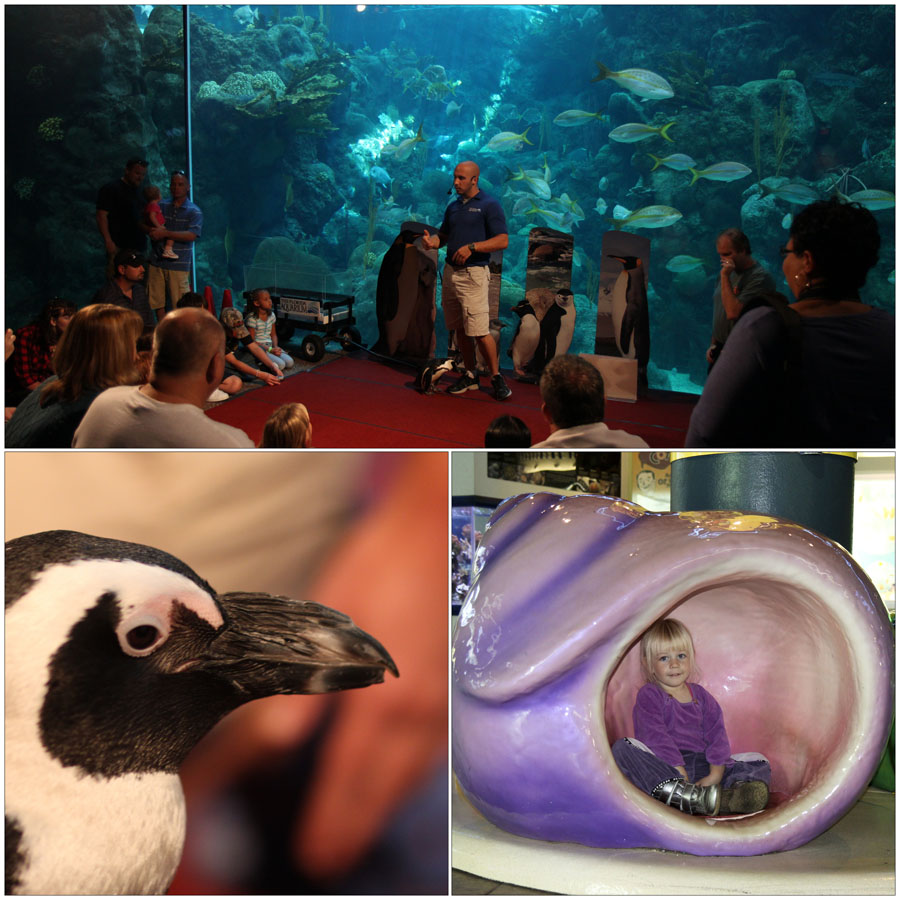 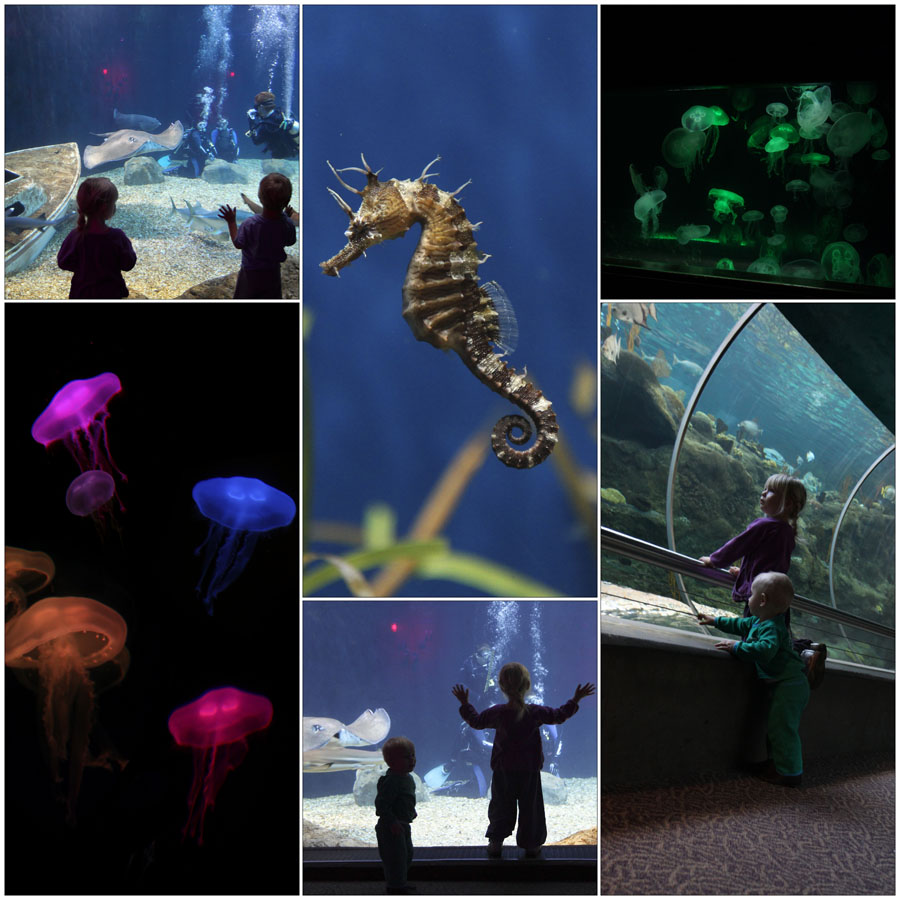 If Winnie the Pooh had been on-board the ship, I’m pretty sure he would have said that it was kind of gloomy. Although the Carnival Legend was build as resent as 2002,  the interior design was extremely murky and tacky throughout the ship. These pictures below are just to give you an idea. They are from the dining room and from a place called “The Enchanted Forest”. Sienna renamed it the spooky forest and it was her favorite place on the ship. Every night she would read her bedtime stories here. It was simply two corridors – one on each side of the ship – with some plastic tree trunks on the one side of the wall, tables and chairs on the other side, and some lights flashing here and there. It was always completely deserted and I have no idea what the designer could have possibly intended with this place, but at least he can rest assured that there is one person in this world who really liked his idea. 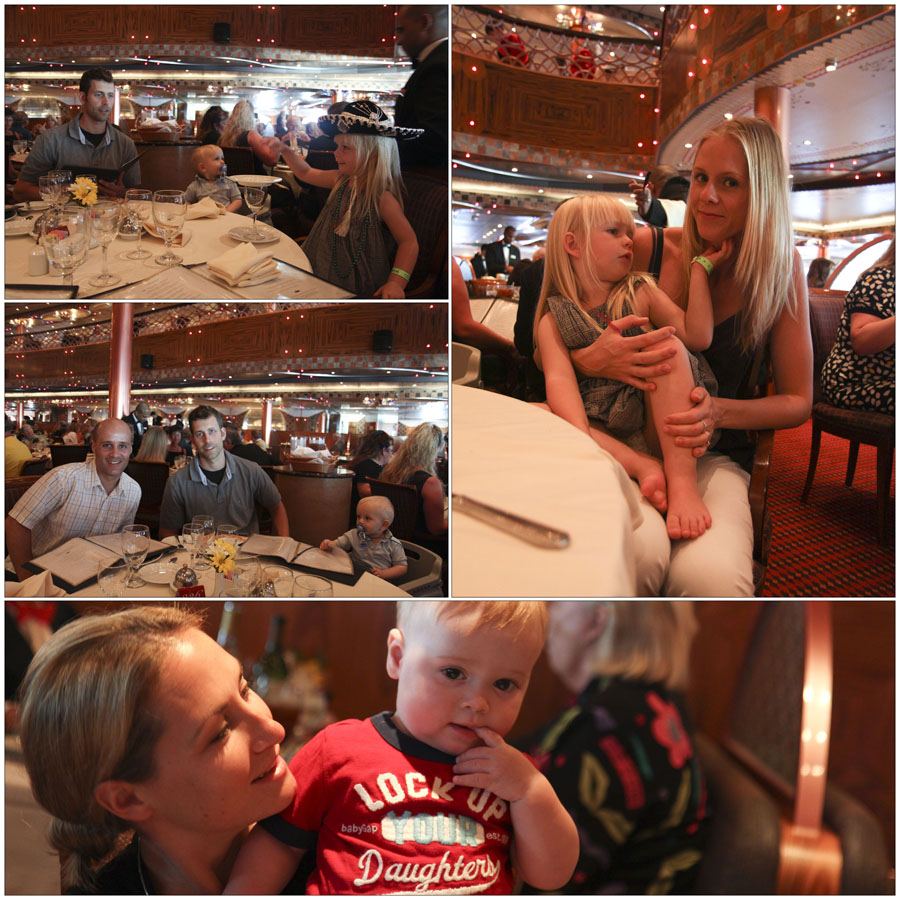 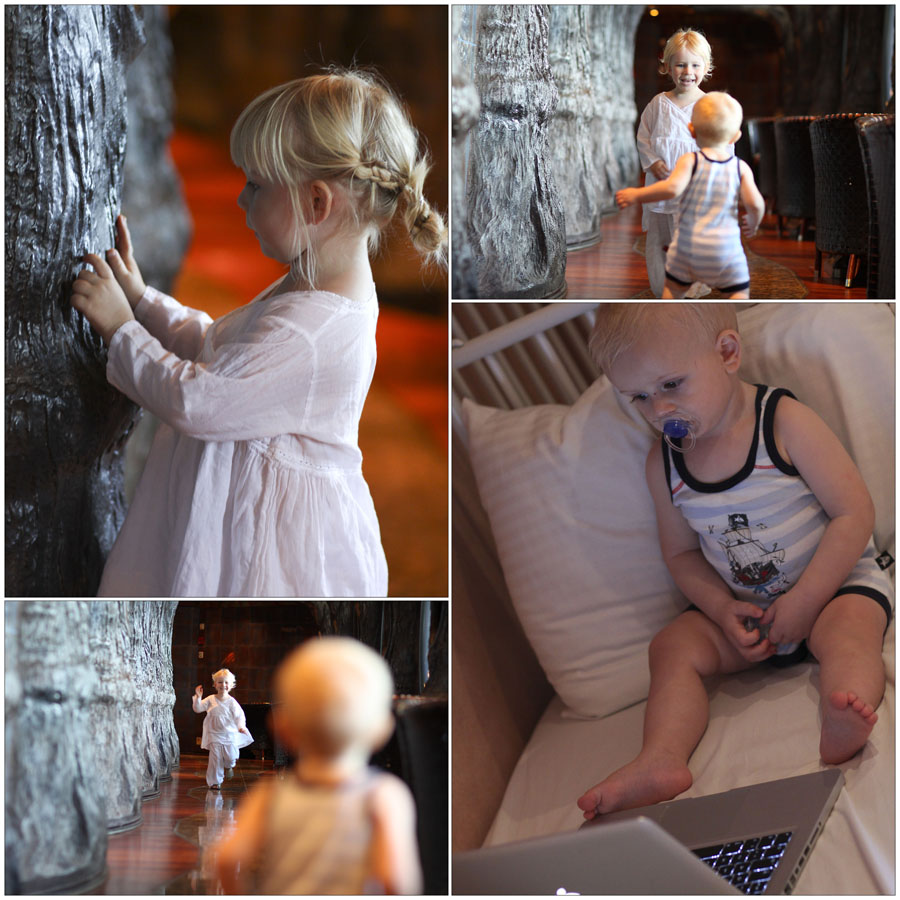 Our last stop was a small island just of the coast of Honduras called Roatan. The weather was extremely humid and hot and we had signed up for an exciting “Pirates, monkeys and parrots tour”. After being instructed multiple times by our guide to discard all bags and bottles so the monkeys wouldn’t attack us, we showed up with another 200 tourists to take turns holding one small monkey. We waited in line while the monkey moved from one arm to the next, but to everyone’s surprise the monkey handler placed the monkey on Sienna’s head instead of her arm. Needless to say, she was fairly uncomfortable, but once it was off her head and on daddy’s arm she was very relieved. Other than monkeys we saw parrots, iguanas and humming birds. Baby Elliot tried to grab a parrot, which quickly turned around and snapped at him. Dad saved him just in time before he lost any fingers. We took a quick jump in the ocean before we had to get back to the ship. 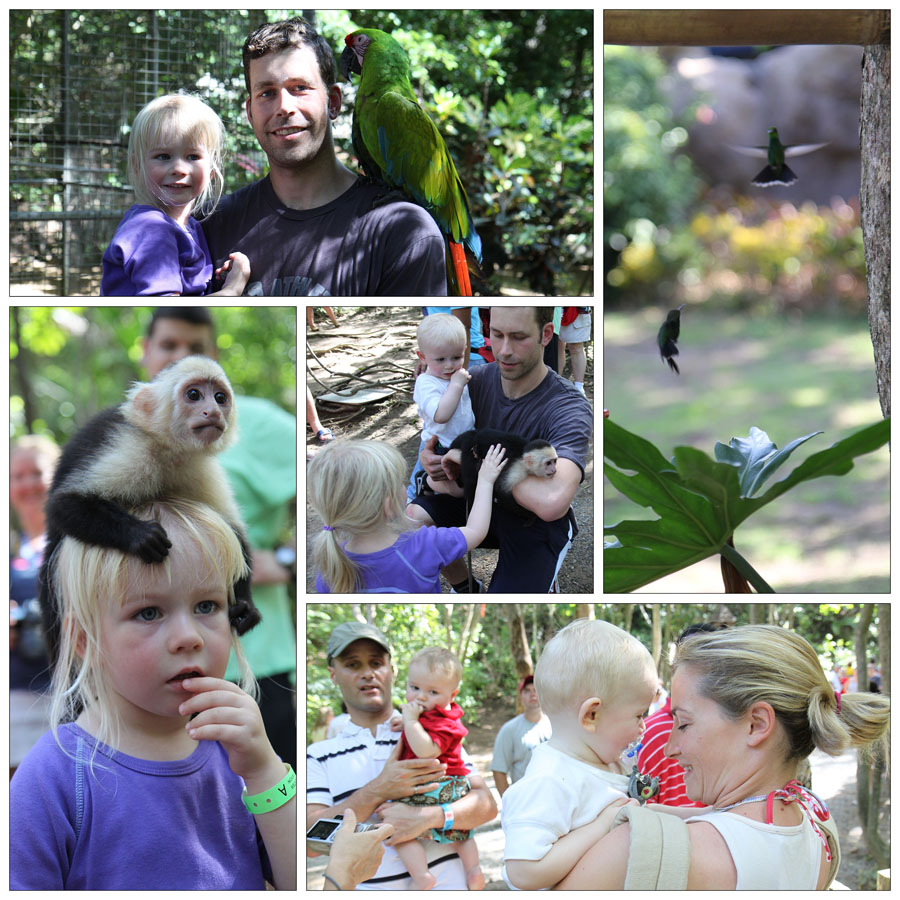 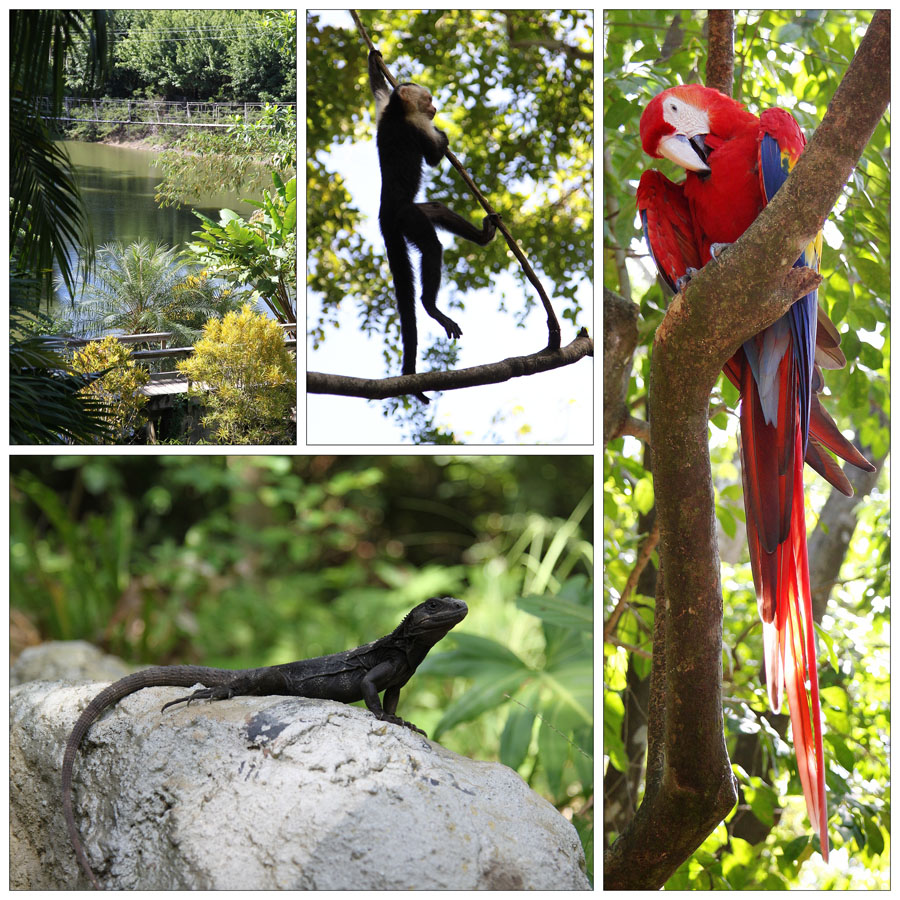 In Belize Kim and I went for some nice snorkeling and we also spent an hour on a tiny island in the middle of nowhere. Kim noticed that one of the sea shells were moving and it turned out that a little crab was living inside of it. It kept hiding, but she lured it out with some sea weed.The little elephant made from towels was one of many amusing creations from the cleaning staff. I guess it is a cruise thing that you twist and shape creatures with the towels, because they did the same thing when we were on the cruise down the Nile in Egypt. 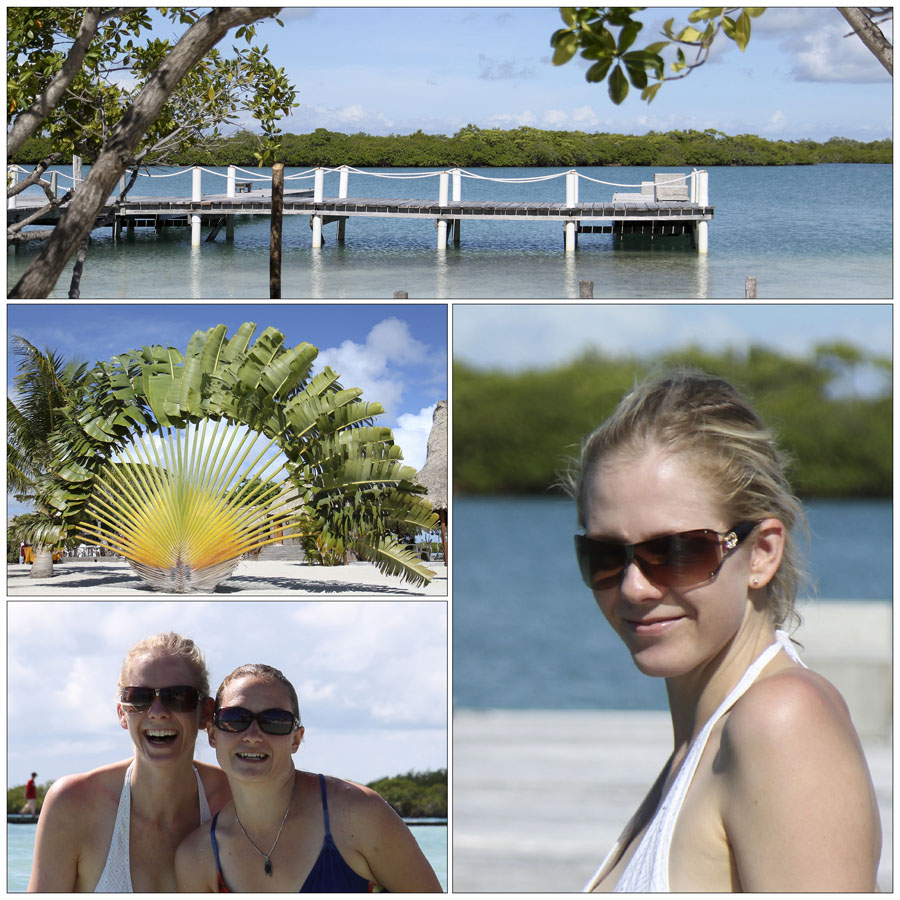 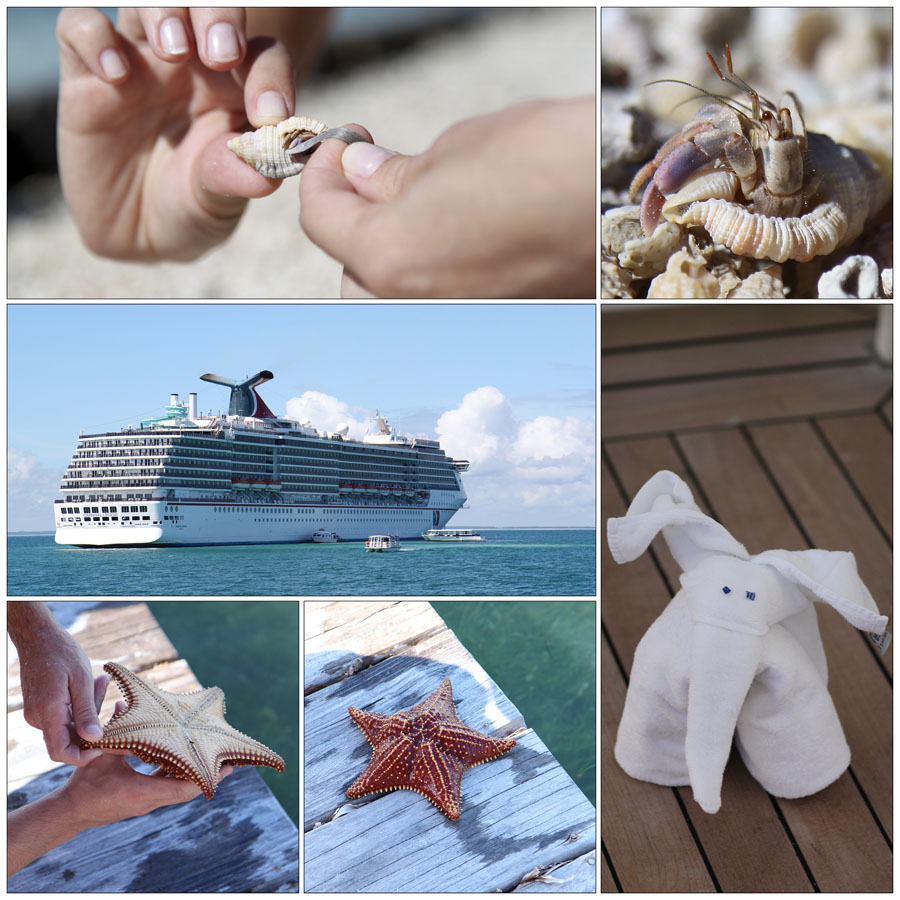 I was expecting to be posting Kodak moment after Kodak moment on this trip, but so far there hasn’t been too many. The weather has not been great at all. It’s warm but it’s raining every other minute. Today we arrived at Cozumel, Mexico and as Shawn and Chris went off for some 4-wheeler/crocodile/ruin/snorkelling event, the rest of us tried to find a nice beach. We got caught in the pouring rain and since the kids were wet anyhow, we let them splash around for a bit. Elliot wanted to head out on his own, so he continuously tried to make it for the alley behind us. It didn’t help any that Kim had a serious talk with him. As it cleared up we found the only nearby hotel with a pool and a beach – just in time for another rain shower. Elliot and mommy had a little swim in the rain/ocean, but the resort wasn’t too minded towards kids, so we headed back to the ship after a short while.

Tuesday we arrived at the Cayman Islands, but unfortunately it was raining cats and dogs most of the day so we never made it to the nice beach. There was plenty of water around, though, so Sienna and Elliot enjoyed some serious puddle jumping. We also went on a semi-submarine trip, but the visibility wasn’t great due to the weather and the air conditioner was broken on the boat, so it was somewhat of a humid and stinky ride. Back at the ship the kids had some fun in the pool and after that they relaxed with a bubble b*th in the Jacuzzi with their dad. Other than that we are spending some quality time with our good friends – Kim and Chris and their son Lucas. For a short while we also enjoyed some local company in the shape of a goofy-looking bird. A few of the pictures below are from our one night in Tampa before the cruise, where Sienna had an evening swim in the hotel pool. 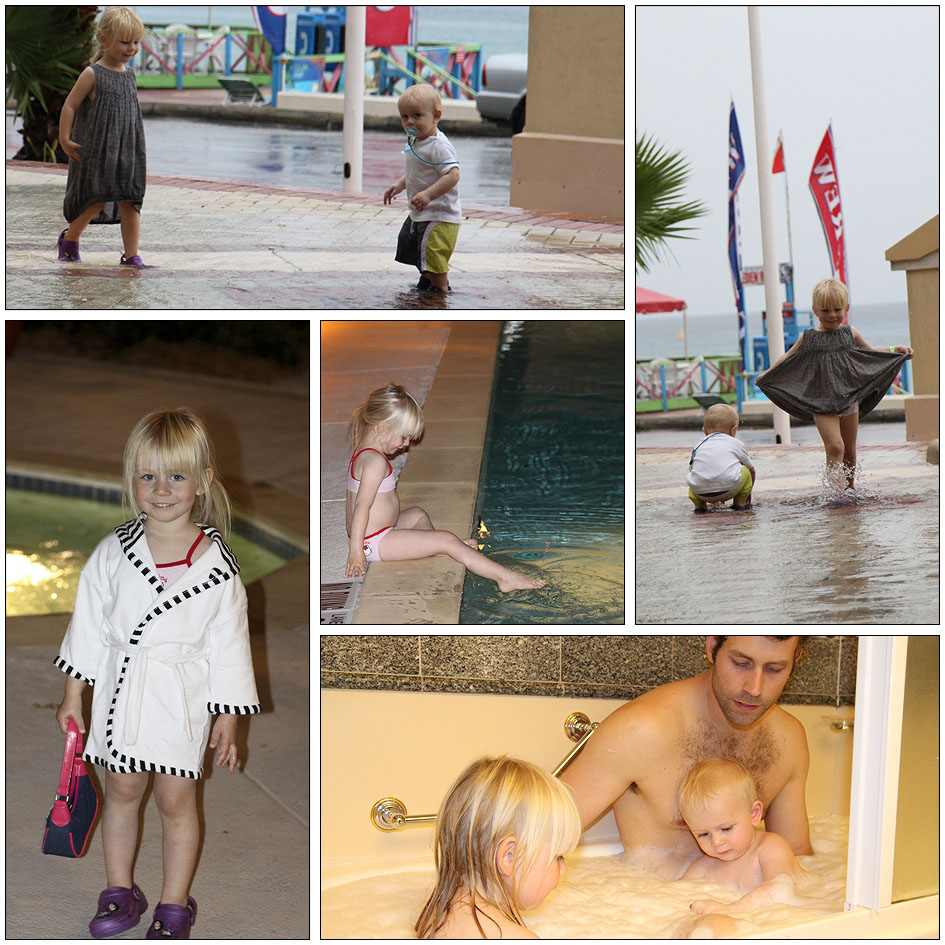 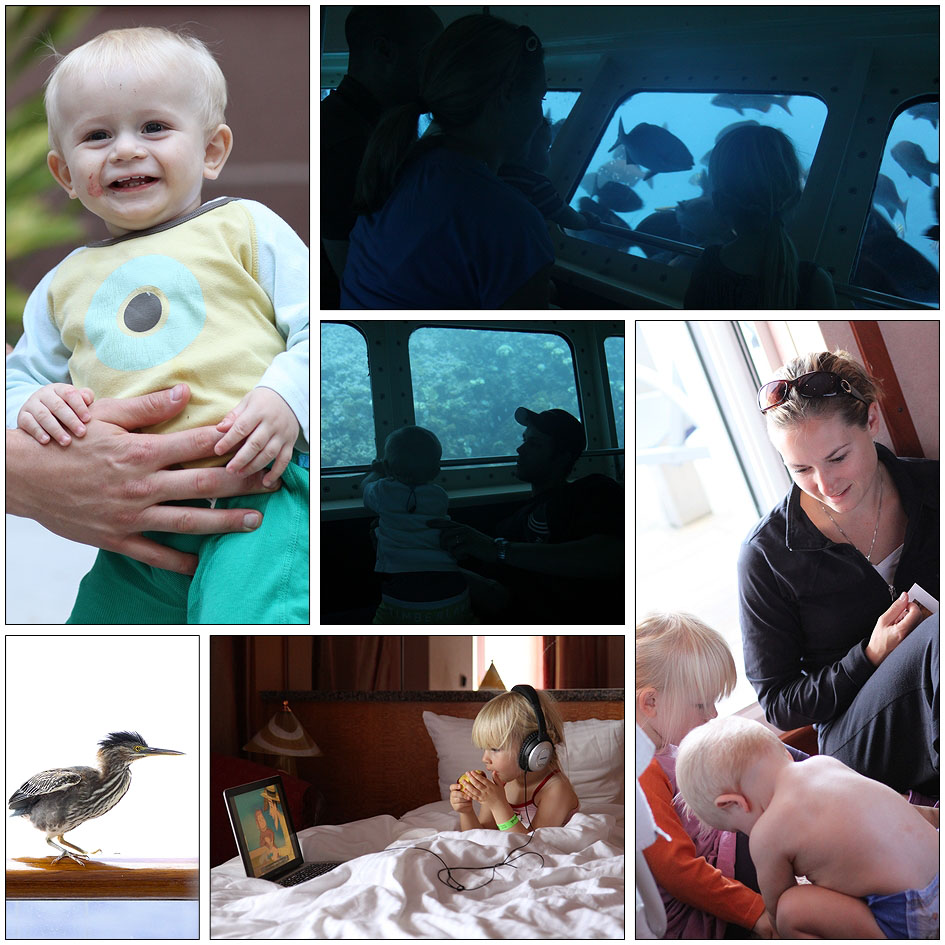 On Wednesday we drove 2½ hours to get to Windsor where cousin Tessa, aunt Karen and Art lives. Tessa is the cutest and happiest little baby and she got lots of kisses, snuggles, and hugs from her cousin Sienna (she got a few smacks and scratches from cousin Elliot). Tessa lives in a nice and spacious house, but most of the walls are painted in dark colours that suck up all the light – not great for picture taking (when one refuses to put on the flash). Tessa’s room is nicely decorated in lavender colours, though, so we managed to get a few good shots in there.

Sienna and Elliot enjoyed themselves in the new surroundings and Tessa was her smiley old self all the way. Sienna particularly liked that she got to stay up real late to play games with aunt Karen. 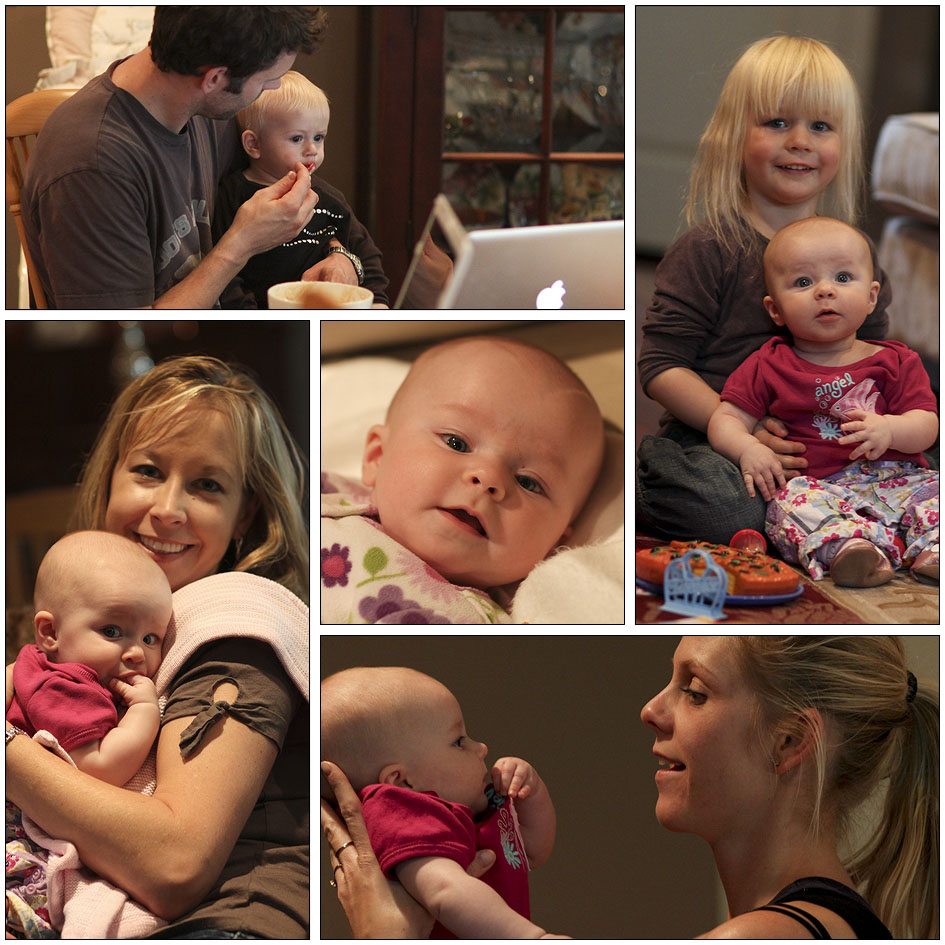 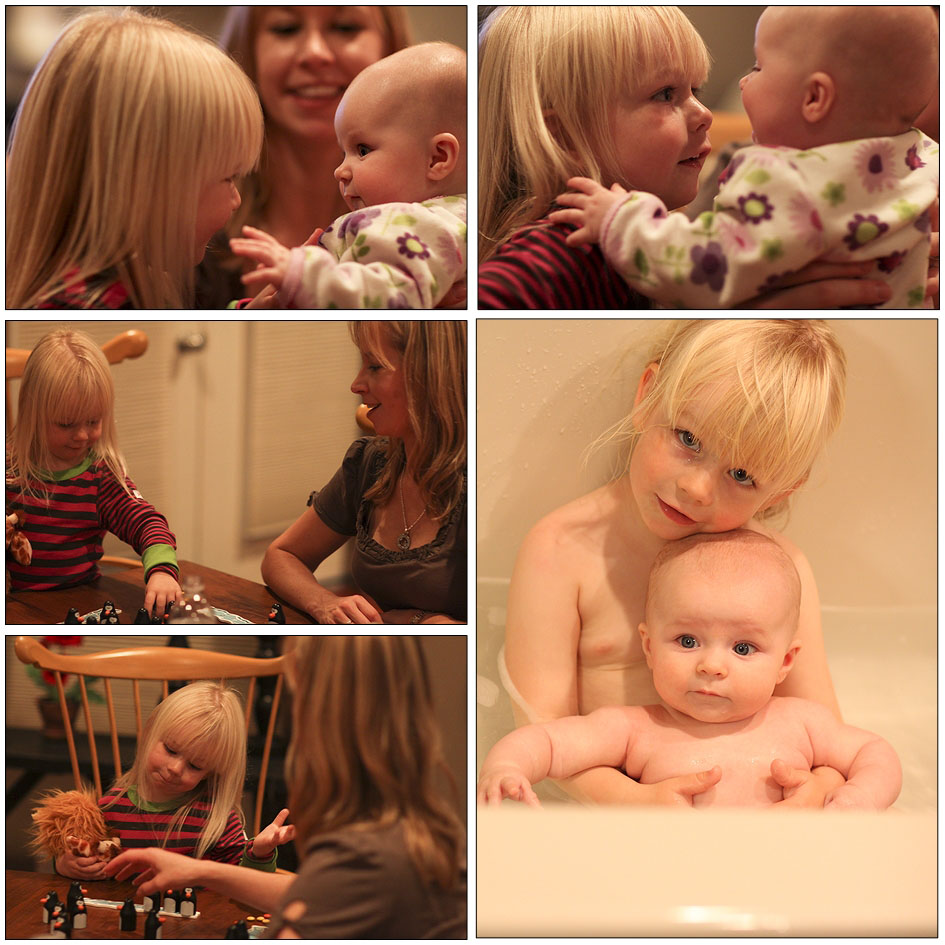 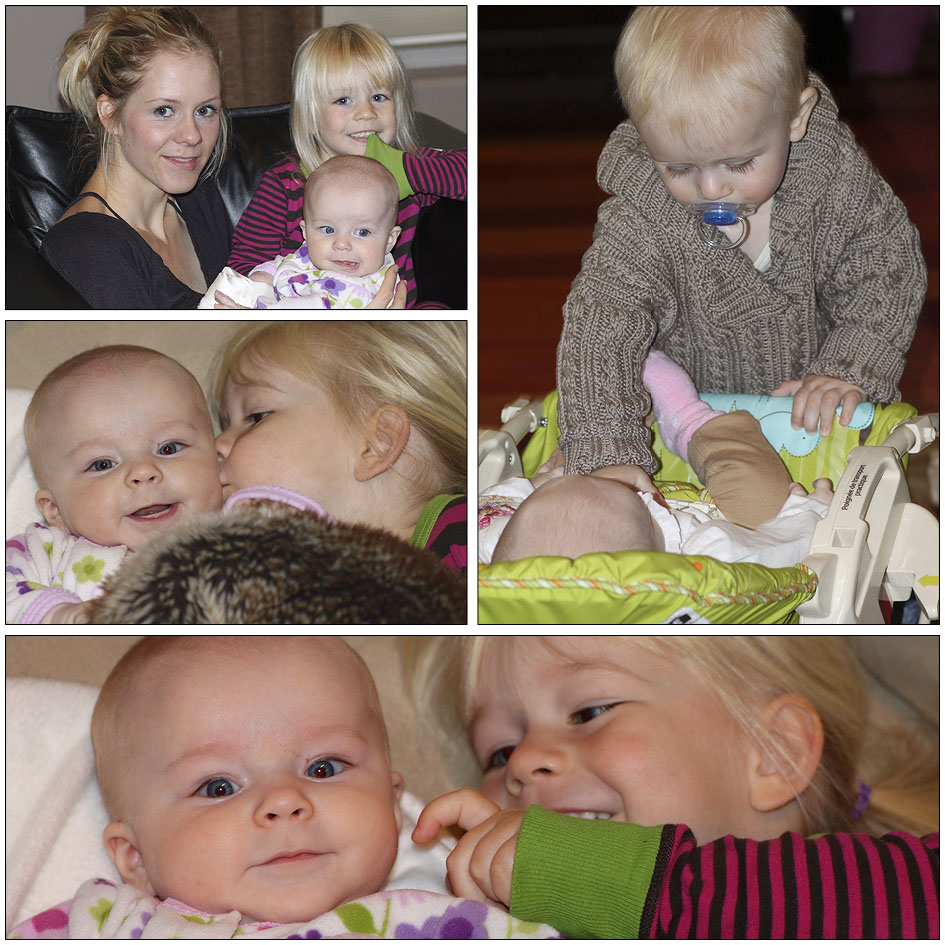 We are back from our little trip to Norway. Despite the fact that the kids are still having some serious sleeping issues, we had a very nice time. The sun was shining and we got to see lots of dinosaur bones and funny statues at the park. The new opera house offered a lot of unique backgrounds for photo opportunities. Unfortunately Sienna was allergic to something in the Norwegian air and couldn’t stop sneezing. We got the best day possible and when we arrived back in Copenhagen it was pouring rain.

Here are some snapshots from our trip to a very nice summerhouse on the Vest coast of Zealand, Denmark. We were there the last week of June (2009) and the weather was unbelievable (for Danish standards, anyhow). Bedstefar Carlos (grandpa Carl) and mormor (grandma Elisabeth) stayed with us for 3 very nice and relaxing days. Jacob and Maibritt stopped by one day for dinner and so did David, Louise and Gabriel. 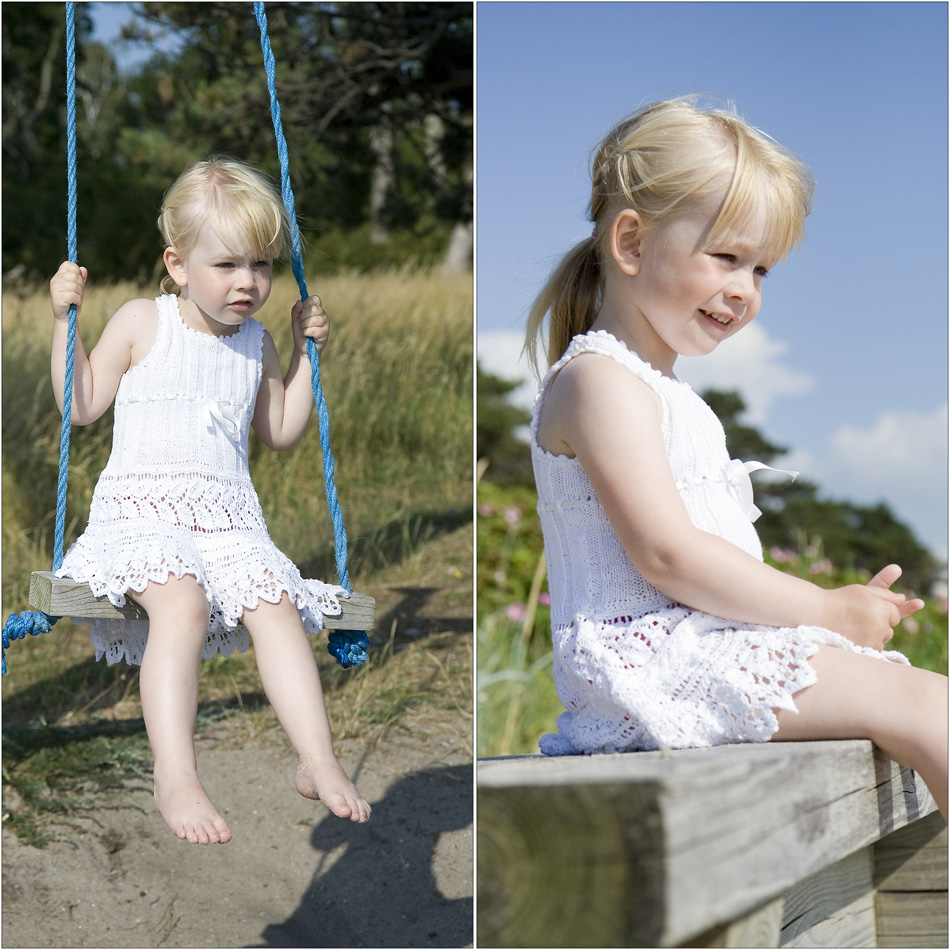 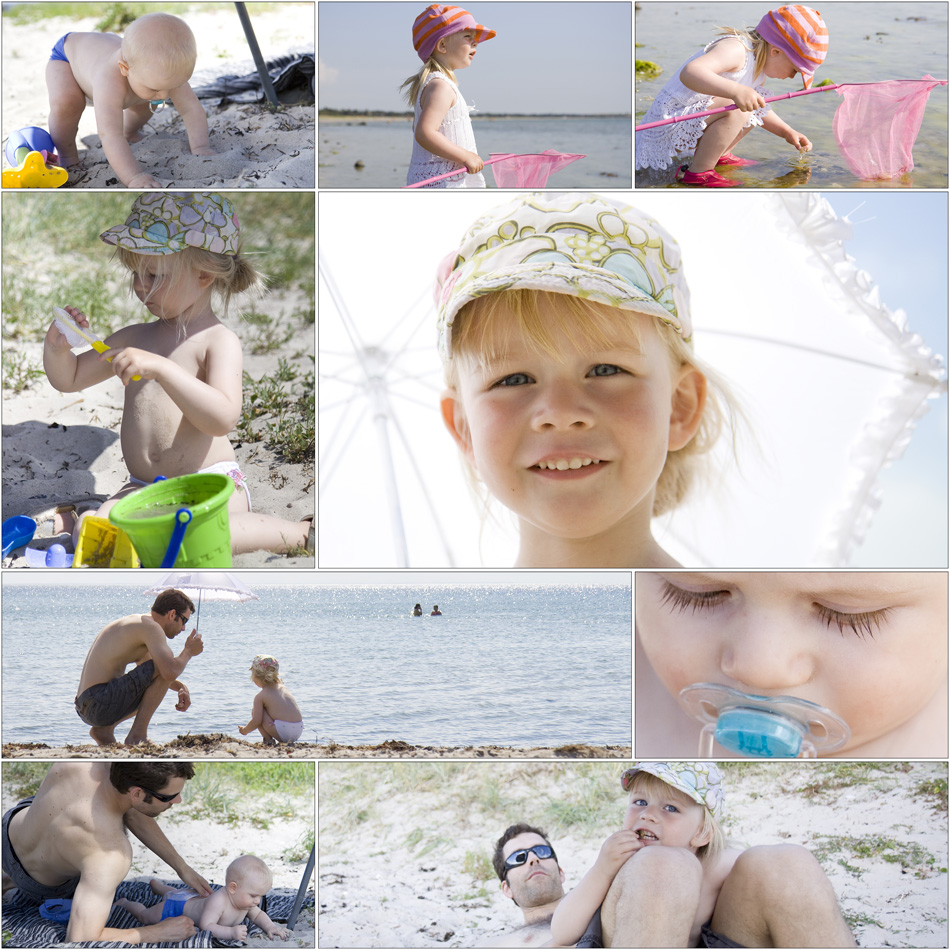 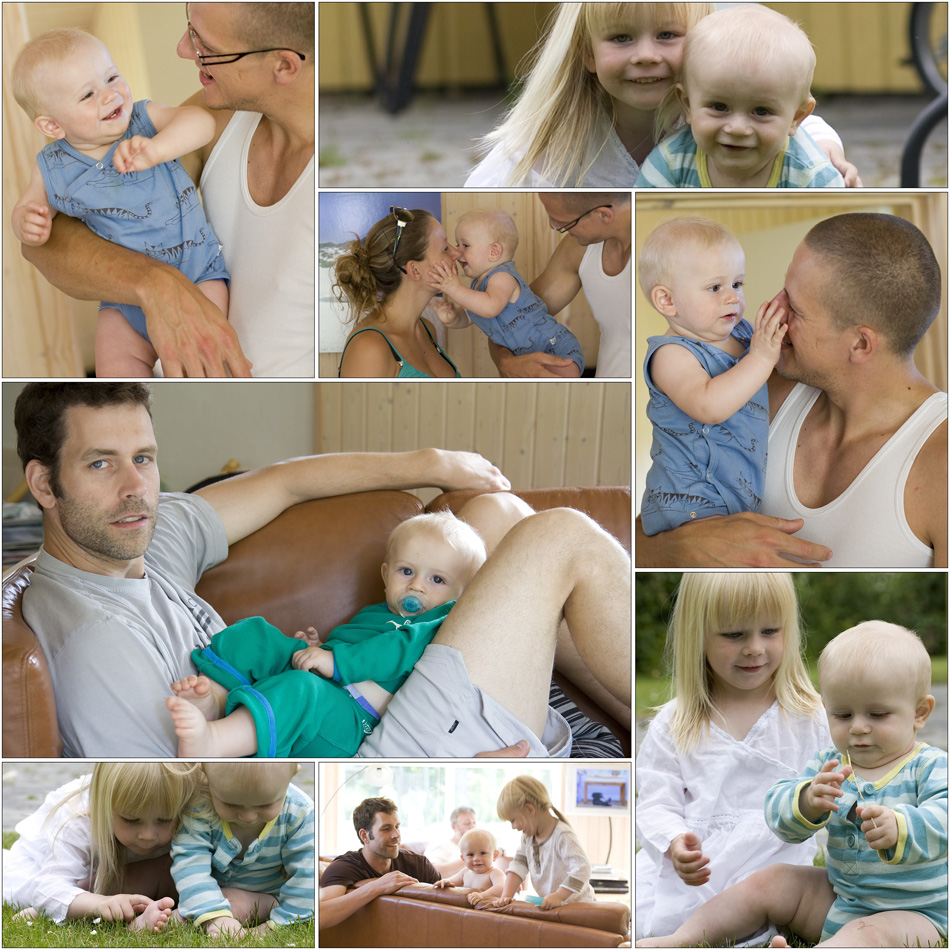 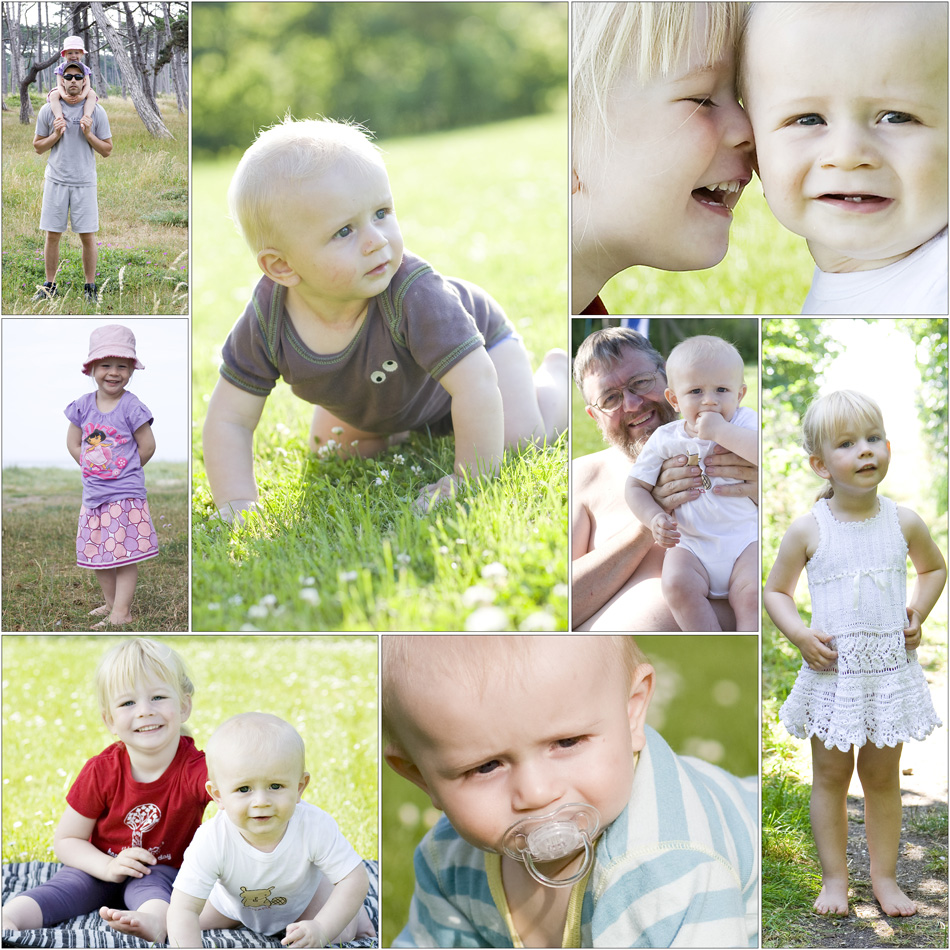 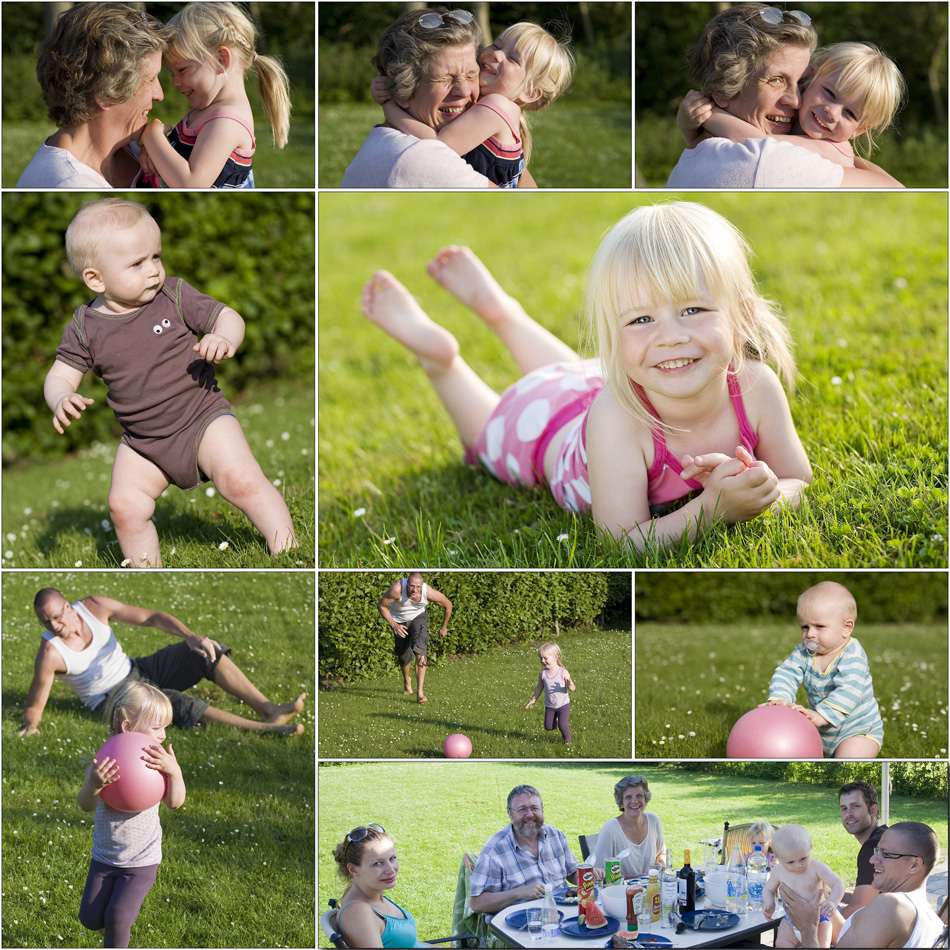 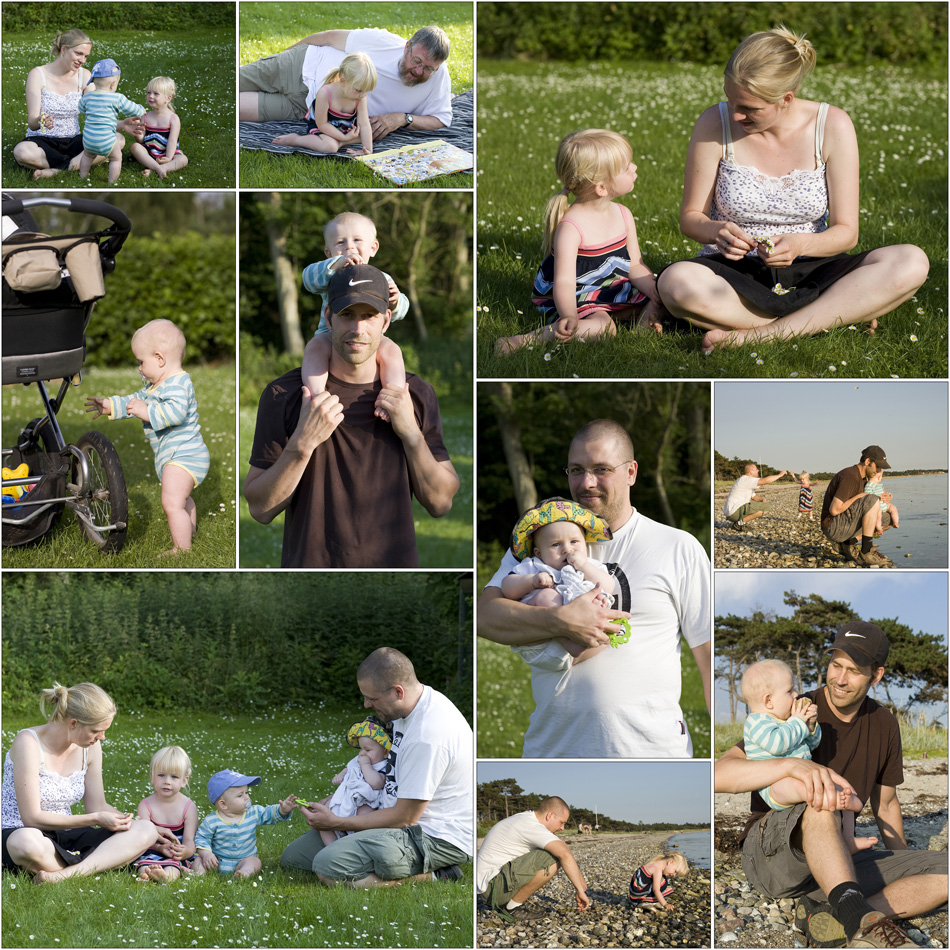 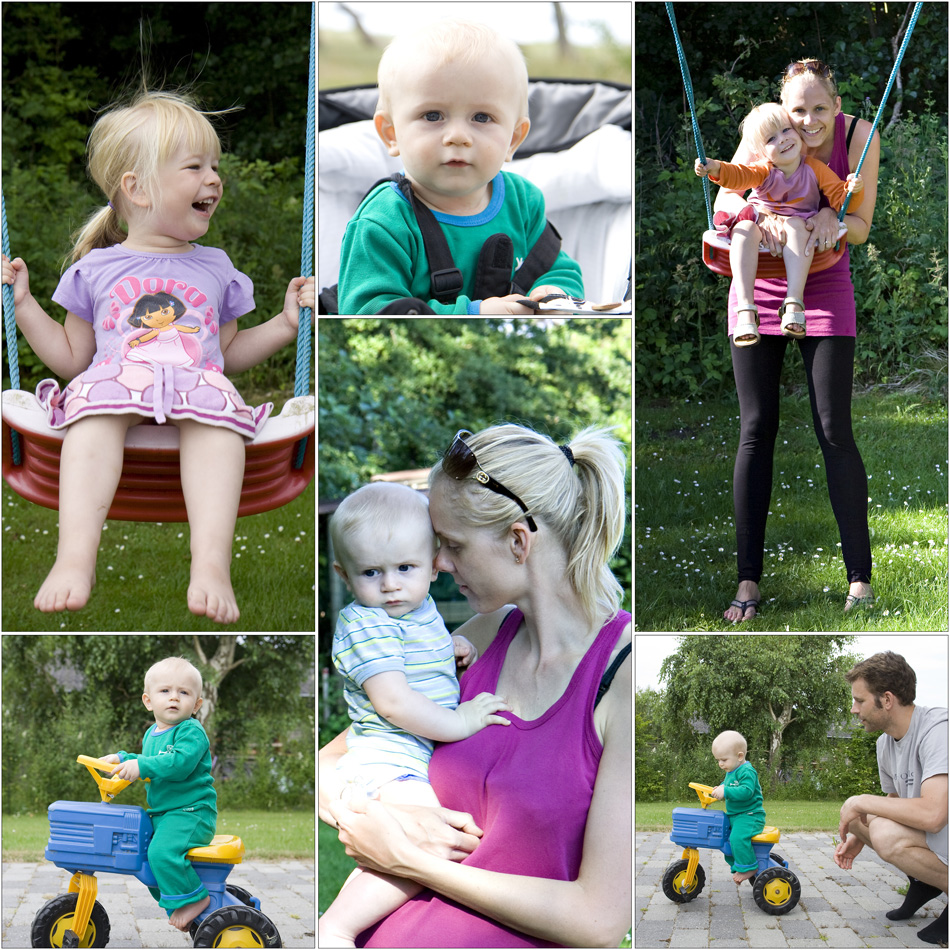 Please let us know what you are thinking by posting comments.